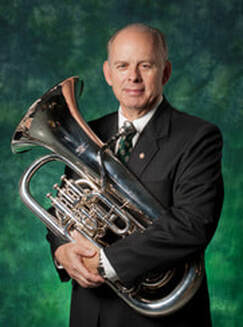 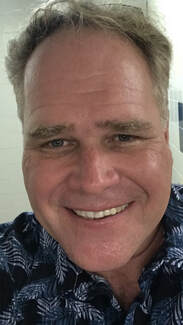 Dr. David William Brubeck serves as Professor of Music at the Kendall Campus of Miami Dade College where he coordinates the chamber music program and teaches trombone as well as courses in Music Theory and Jazz. Brubeck performs regularly with the Miami City Ballet Orchestra-Opus One, Orchestra Miami, an innovative jazz duet- DUO BRUBECK, and The Brubeck Brass. Brubeck’s occasional performances have included the likes of Stevie Wonder, Barry Gibb, The Bolshoi Ballet, Ray Charles, the American Ballet Theatre and as a solo artist for the International Trombone Festival, The International Euphonium Tuba Festival, The International Trumpet Guild Festival and the International Tuba and Euphonium Conference.
Brubeck’s compositions, entitled Stereograms, have been performed and recorded throughout the globe and three were recently recorded by Boston Symphony bass trombonist James Markey on his latest CD, “Psychedelia”. These self-accompanied rhythmic etudes inspired by the Cello Suites of Bach and the unaccompanied works of Bobby McFerrin have been transcribed for saxophone and tuba. As a soloist, Brubeck has been featured with the Miami Wind Symphony, The Florida Atlantic University Orchestra, Greater Miami Symphonic Band and with pianist Bronwen Rutter. Brubeck has commissioned, premiered and performed countless works for bass trombone. 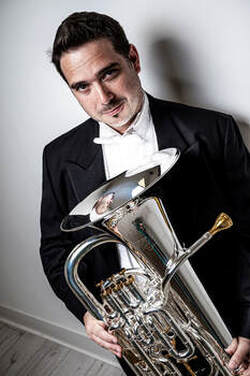 ​The grandson and son of well-respected euphonium players from the Welsh Valleys, and himself described by The Observer as ‘a great ambassador for the euphonium, possessing an astonishing technique and an engaging stage presence’, David Childs is regarded as one of the finest brass musicians of his generation, touring extensively throughout Asia, continental Europe, and North America, and recording actively for radio, television, and CD.
​
He has appeared as soloist with the BBC, Manchester and RTÉ Concert orchestras, BBC National Orchestra of Wales, BBC Philharmonic Orchestra, Philharmonie Baden-Baden, Royal Liverpool Philharmonic Orchestra, Royal Philharmonic Orchestra, Sinfonia Cymru, Welsh National Opera, Vancouver Symphony Orchestra and many of the finest brass bands and military bands in both the UK and USA. He has made solo appearances at the Singapore International Festival, Harrogate International Festival, Cheltenham Festival, Melbourne International Festival, BBC Proms and New York Festival, given solo recitals at the Wigmore Hall, Purcell Room and Bridgewater Hall, and performed concertos at the Concertgebouw, Royal Albert Hall, Queen Elizabeth Hall, Royal Festival Hall, Symphony Hall, Lincoln Center and Carnegie Hall New York.
​
David Childs is a Besson Performing Artist 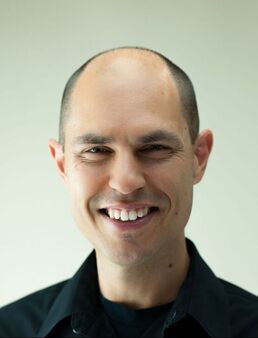 ​Zach Collins is professor of Tuba and Euphonium at Indiana University of Pennsylvania. At IUP, Zach teaches applied lessons to all tuba and euphonium majors, leads the IUP Tubaphonium Ensemble, and teaches classes in music technology. In 2019, he released his first solo album, Chronicle. Chronicle was recognized with the 2021 International Tuba and Euphonium Association Roger Bobo Award for Excellence in Recording for the best Solo Tuba Album.  Recent solo and chamber engagements have taken him to Ohio, West Virginia, Washington, DC, New York, Texas, and Moscow, Russia. His interpretation of William Kraft's Encounters II for Solo Tuba was released on Cambria Master Recordings in August 2009. 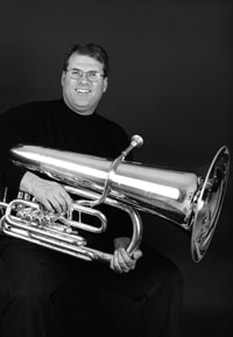 Warren made his solo debut with the Philharmonic in 1989, performing the world premier of Roger Kellaway's Songs of Ascent for Tuba and Orchestra, commissioned by the Philharmonic.

As a member The Juilliard School faculty from 1989-2002, he has been active with students and has given master classes in many regions of the world including the former Soviet Union, the Far East and South America.  Apart from the orchestral records Warren has made with the Philharmonic, he has made four recordings with The Canadian Brass for Sony Classical and Philips labels and Tuba, a recording of leading tuba and euphonium players from Germany and the US, on EMI Angel Records.

In 2001, Warren was diagnosed with focal dystonia in his upper lip which has ended his playing career. He now lives in Denver, CO where he teaches at the Lamont School of Music at the University of Denver and the Aspen Music Festival and School in the summers. 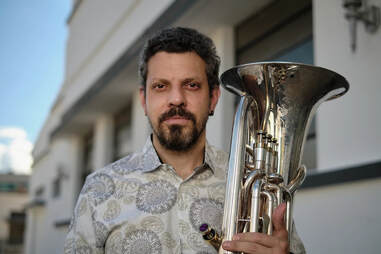 Fernando Deddos acts globally as a composer, euphoniumist and professor. He is currently an associate professor of the UFRN – Federal University of Rio Grande do Norte State in Natal, Brazil, since 2016.
Besides his participation in interdisciplinary, chamber music and Brazilian popular music projects as euphoniumist, pianist, conductor and composer, Deddos recorded the very first euphonium album in Brazil (EuFonium Brasileiro (2009), which received the International Tuba & Euphonium Association’s Roger Bobo Awards for excellence in recording (Arizona, 2010). 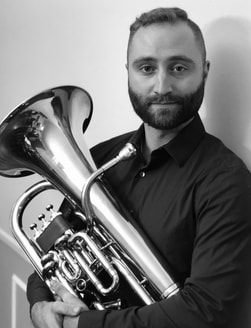 A native of Darlington, South Carolina, Paul Dickinson works across the Southeast as both a performer and teacher. He recently joined the faculty at Kennesaw State University teaching tuba and euphonium.  His pleasing blend of technique and musicianship has earned him praises from some of the most respected brass musicians in the U.S.A. and numerous placements in major regional, national, and international competitions. He has also been a semi-finalist for prestigious military band auditions. Paul currently serves as principal euphonium for the Gwinnett Symphony Wind Orchestra, principal baritone for the Georgia Brass Band, and principal euphonium for the Poinsett Wind Symphony based in Greenville, SC. He is a founding member of DIVERGENCE, a professional tuba quartet based in Atlanta, GA.​

In addition to his pursuit of performance excellence, Paul has a passion for music education. He regularly works with middle school, high school, and collegiate students across the Southeast. For over a decade, he has been presenting master classes on a variety of issues facing developing brass musicians of all ages. In addition to his work with brass-specific pedagogy, Paul regularly works as a consultant and clinician for both concert and marching ensembles. In the past few years, his students have received high ratings at Solo and Ensemble festivals, won contracts with championship DCI corps, gained acceptance to highly competitive college studios, and have rapidly advanced to take top seats in university-level ensembles at strong music schools in the region. Several of his students now lead successful band programs in the Southeast. 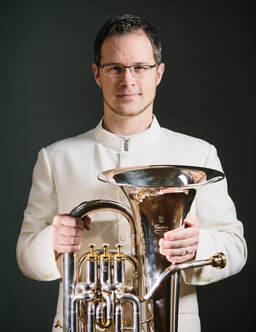 ​Adam Frey is the Artistic Director of the IET for the past 18 years and travels the world sharing his music with audiences and students spanning 5 continents. He has commissioned more than 90 new works and arrangements as well as bringing the euphonium to orchestral audiences with his landmark recordings with the New Zealand Symphony Orchestra.  Adam has soloed with orchestras the world over, including the world famous Boston Pops, Cheju Symphony Orchestra (South Korea), US Army Orchestra (Washington DC), Harvard Pops (MA), Fort Collins (CO), Indian Hill (MA), the Vaasa Symphony Orchestra (Finland), Cascade (WA), Greensboro (NC), Clemson (SC), LaGrange (GA), Minot (ND), and Northeastern (MA) Symphony Orchestras. He also has been invited to perform major euphonium and tenor tuba features from the standard orchestral repertoire with the Atlanta, Seattle, Oregon, and Charleston Symphony Orchestras. He also performs regularly with wind bands and brass bands that have included Soli Brass in Holland, Point of Ayr in Wales, the National Youth Brass Band of Switzerland, and wind bands from Singapore, Germany, Hong Kong, and the United States.  He has over 10 solo recordings and teaches at Georgia State, Reinhardt, and Emory Universities.  His arrangements can be found at Euphonium.com and Pinnacle Brass.  Please visit www.euphonium.com for more information.
​Adam Frey is a Yamaha Performing Artist. 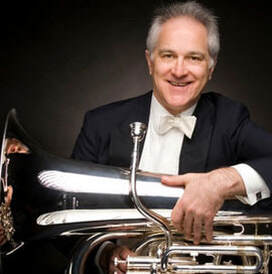 Prof. James Gourlay DMA, MMus, FRNCM, FLCM is a leading performer, teacher, and academic. As well as his work as a soloist, conductor, and member of some of Europe's finest orchestras, James has held high level Academic and administrative posts such as Head of School, Wind, Brass, and Percussion at the Royal Northern College of Music (RNCM) as well as Deputy Principal and Director of the School of Music at the Royal Scottish Academy of Music and Drama (RSAMD), now known as the Royal Conservatoire for Scotland. Under James Gourlay's leadership, the Royal Northern College of Music became one the top schools in the world for brass and wind studies, winning two awards presented at Buckingham Palace by Her Majesty the Queen of England, and in May 2008, the School of Music of the RSAMD was voted best UK Music school by the Guardian newspaper's Education & Universities Guide, moving up from the its previous best of fourth place. James has been a member of the Philip Jones Brass Ensemble, English Brass, the City of Birmingham Symphony Orchestra, BBC Symphony Orchestra and the Orchestra of Zürich Opera House and has performed with the London Symphony Orchestra and the Vienna Philharmonic. He has been Musical Director of a number of the greatest brass bands in the World, such as the Grimethorpe Colliery Band (stars of the movie ‘Brassed Off') and is in demand as a clinician, giving classes and lectures in Paris, Lausanne, and at the Juilliard as well as an orchestral conductor working internationally. He is currently Music Director and CEO of the River City Brass, the world's only full-time professional brass band, adjunct professor of tuba at Duquesne University, and is International Chair of Low Brass Studies at the Royal Northern College of Music, Manchester, England. 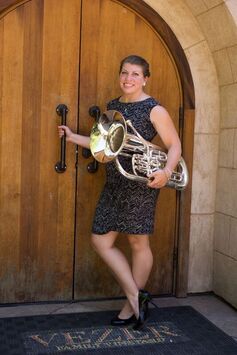 TSgt ​Alison Mahovsky is a euphoniumist with the Ceremonial Brass, The United States Air Force Band, Joint Base Anacostia-Bolling, Washington, D.C. A native of Burke, Virginia, her Air Force Career began in 2020.

An accomplished soloist, Alison has received several international accolades. In 2010, she was the winner of The United States Air Force Band’s own George S. Howard Young Artist Competition. She was runner up in the International Women’s Brass Conference’s Mock Audition competition in 2014, and in 2016 Mahovsky was awarded a Bronze Medal in the Artist Division of the Leonard Falcone International Euphonium Competition. 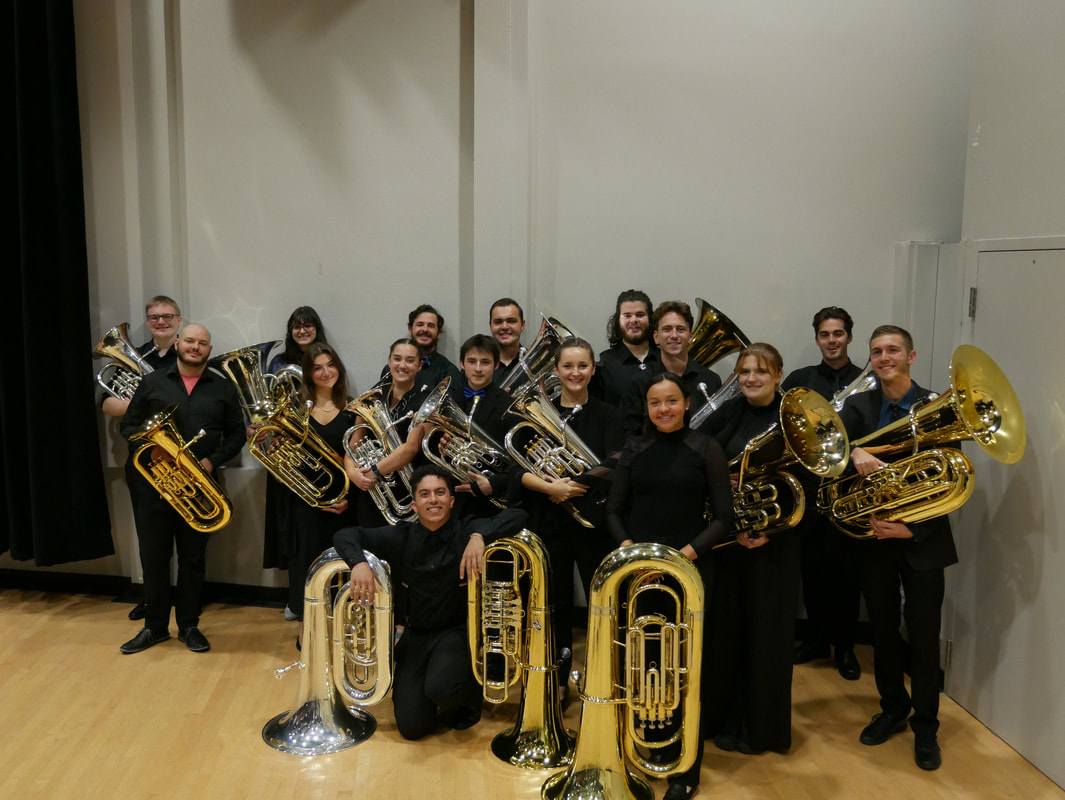 ​Comprised of Dr. Danielle VanTuinen’s students, the UF Tuba/Euphonium Ensemble is a conducting, arranging and performance opportunity for minors through graduate low brass students. This ensemble explores works from varying genres and diasporas, while focusing on highlighting both younger and muted voices. The UF Tuba/Euphonium ensemble meets twice a week and will give 1-3 performances a semester both at the University and throughout the community. 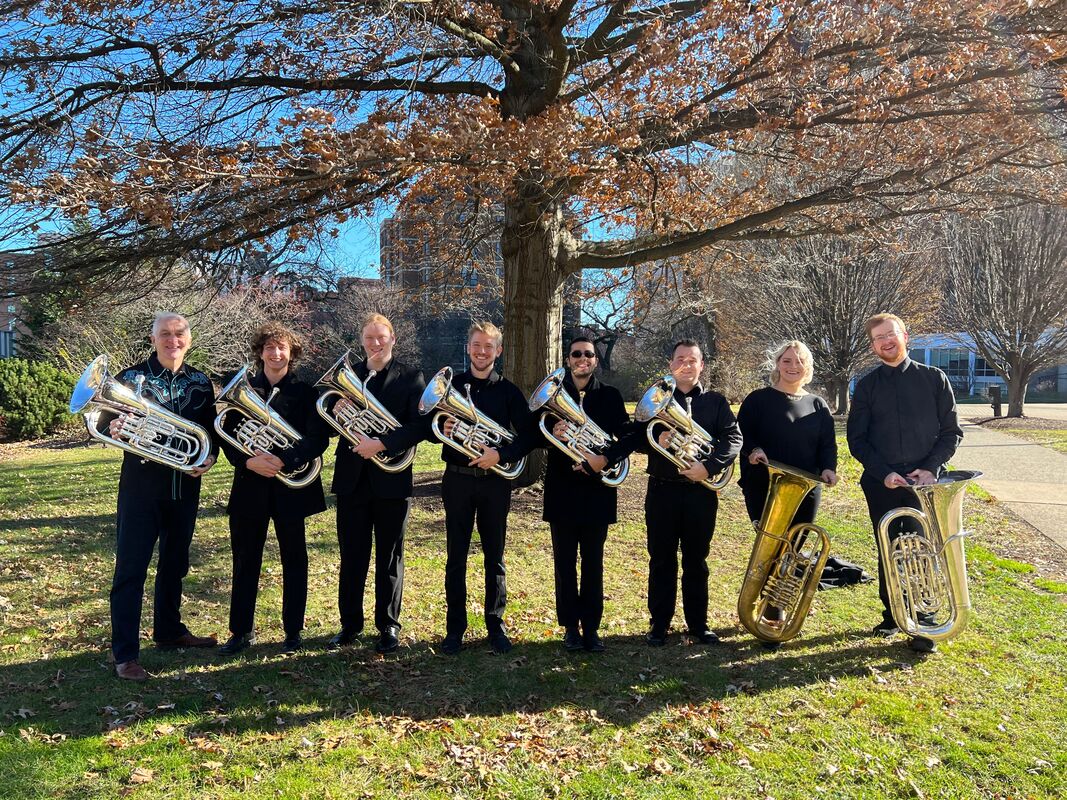 ​
The Duquesne University Tuba Euphonium Ensemble is comprised of mostly graduate-level students under the direction of Dr. James Gourlay. The group meets once a week, and performs frequently around campus and the Pittsburgh region. This ensemble plays music arranged specifically for the current members, including works by underrepresented composers.
Recent events include ThanksTubaGiving featuring guest artists Adam Frey, Craig Knox, and Lance LaDuke. Members of the ensemble actively participate in Pittsburgh’s annual TubaChristmas. 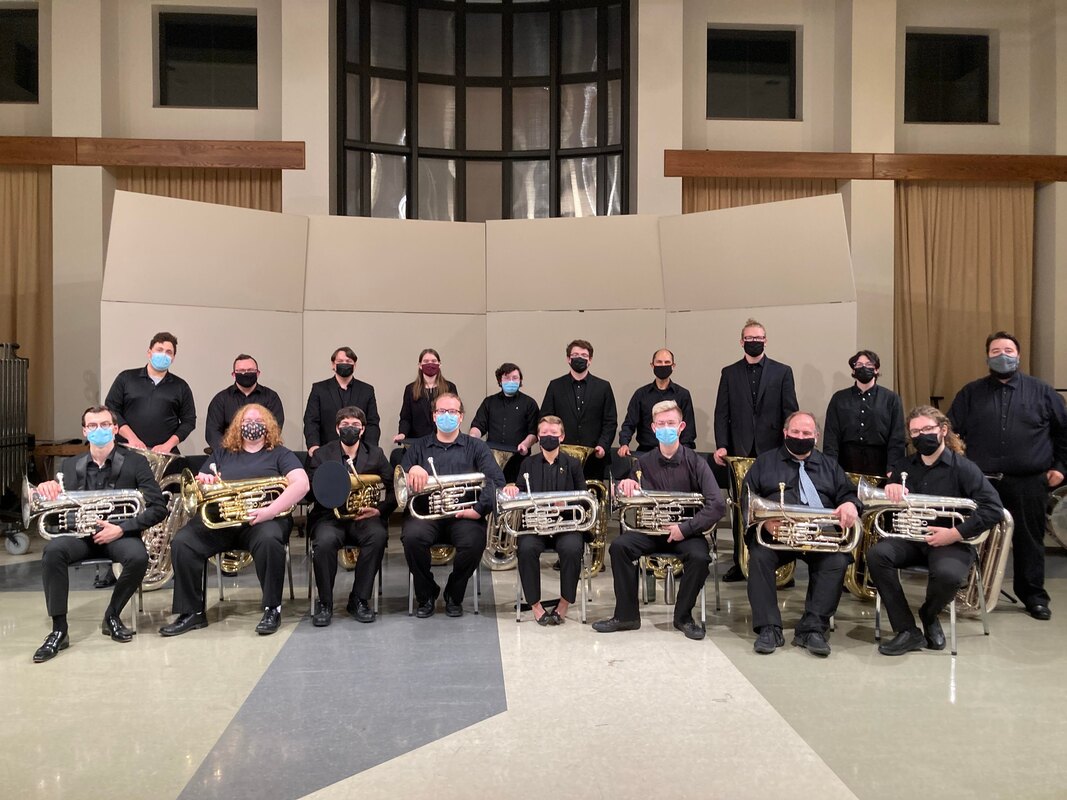 ​The IUP Tubaphonium Ensemble was formed under the direction of Dr. Gary Bird and presented its first concert in the Fall of 1971. Since that time it has performed numerous concerts, including performances at the 2018 IET Festival, 2014 International Tuba Euphonium Conference, 1978 and 2012 PMEA Conferences, the 1995, 1999, 2007, and 2009 U.S. Army Band Tuba-Euphonium Conferences in Washington, D.C., the 2013 and 2015 Northeast Regional Tuba Euphonium Conference, and the 1996 and 1998 Colonial Euphonium and Tuba Institute in Albany, NY and Indiana, PA respectively. The IUP Tubaphonium Ensemble has appeared extensively throughout Pennsylvania, primarily within the format of school assemble programs. This group has also been involved in sponsoring TubaChristmas in Indiana, PA for more than 30 years.

Over the years, the ensemble has commissioned many composers to compose works especially for them, including: Jack Stamp, Barbara York, Anthony O'Toole, Gregory Fritze, Al Agatucci, Charles Davis, and W. Roy Mitchell. The ensemble performs in a variety of styles from classical to pop, contemporary to jazz.